Early records show that a meeting of the Grand Black Chapter of Ireland was held in the White Hart Hotel, Omagh on Friday 7th April 1865. The purpose of the meeting was to consider the formation of a County Tyrone Grand Black Chapter. Represented at that meeting were Aughnacloy and Strabane District Chapters and two private Preceptories not connected to any District, namely RBP No. 4 Bush and RBP No. 35 encamped at Killyman.

A resolution was passed at the meeting that Aughnacloy should be No. 1 District and Strabane No. 2. However at the next meeting, held on 9th November 1865 in Moores Hotel, Dungannon, a motion was put forward to rescind that resolution and to move that Killyman should be No. 1 District of the County Tyrone Grand Black Chapter, and at a further meeting on 7th May 1866 in Annahoe House, Ballygawley, it was unanimously agreed that Killyman should be No. 1.
RBP No. 52, Dungannon and RBP No. 77, Derryoghill first appear on official records at around this time.

From a beginning of four Preceptories in 1866 the District Chapter has now expanded to sixteen preceptories and rose to 1035 members by 1971.

In 1960, the District Chapter, in conjunction with Killyman Orange District, purchased 10 acres of land at Ballygawley Road, Dungannon for £2250. The land was to be used as a demonstration field. It was named Dobson Park in memory of the late sir Knight and Brother Thomas Dobson who was DDM of Killyman Orange District and was most generous with financial support towards the purchase of the property. In 1992 further land consisting of 22 acres came on the market at Dungannon Park and this was also purchased by the two Districts. It is now known as the Lord Northland Memorial Park and was dedicated on 11th June 1997 in memory of Lord Northland, a former Worshipful Master of Killyman Orange District who gave his life in the service of his country during the First World War. 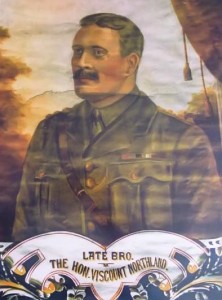 In 2004, the District recognised that there are widespread misconceptions about the Black Institution and decided that the development of this website would be helpful in not only dispelling such misconceptions but would also help to promote the ideals of our Institution – the religious, cultural and charitable activities that are of such great importance to our local community.

Sadly, in November 2009, the WDM, Sir Knt Eric Hall passed away.  He will be long remembered for his efficiency in dealing with District business, his underlying jovial nature and as a man who got things done. He will be greatly missed by Killyman Royal Black District Chapter No 1.

The Worshipful District Masters of the District Chapter since its formation are as follows: